Electrically powered articulated loaders are sold like hot cakes. The compact chargers with battery pack apparently meet exactly the needs of the market. Many clients want a project to minimize emissions and noise for the environment and contractors and rental companies anticipate this by investing in a machine with an electric motor instead of a fuel engine. However, a telehandler with an electric drivetrain has to wait.

Until now, because with the MTE 625 based on a Manitou MT 625, VHS Bladel now offers that solution. Although the manufacturer is also working on an electric machine - the MT 625-E Oxygen was already admired at Bauma last year - owner Geert Vissers has decided to set his own course. The objective here is that the product should be able to run for an entire working day without having to be hung on the charger or having to change the batteries in the meantime.

The mini telehandler has just completed its baptism of fire and has been intensively used for two weeks in an indoor demolition project. Vissers Heftruck Service hired his brainchild with the announcement not to spare it. After all, the entire development process is aimed at building a telehandler that can be used non-stop for 8 to 10 hours without any problems. Also in terms of performance, the electric variant should not be inferior to its diesel brother and so the MTE 625 simply lifts 2.5 tons.

Those are values ​​that are quite interesting for a demolition contractor. And a articulated loader is of course quite versatile, it is not as multifunctional as a telehandler. The fact that the compact telehandler exchanges a bucket for a fork carriage in no time makes the machine a real all-rounder on the work floor. Exactly as VHS Bladel envisioned.

Dennis van Rijn explains: “We are a creative company, which we have proven in the past with the ManiRail track machines. We wanted to build an electric telehandler that you can really use in practice. It makes little sense if the machine lasts for four hours, and then it is pushed aside again. In our view, that is the big difference between how many manufacturers look at electrical machines and how they are handled by the automotive industry. We have decided to go for the latter. It is certainly not the easiest way or the cheapest, but in the end it does yield a product that we are very proud of alone. The MTE 625 is really our "baby". " 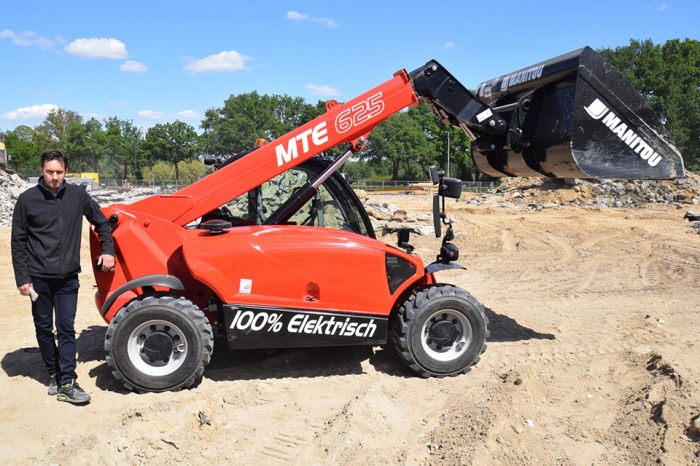