The German engine builder Deutz focuses on hybrid and electric drives in addition to the diesel engine. Deutz recently showed three working prototypes, two fully electric and one hybrid, based on converted Liebherr and Manitou telehandlers. Deutz wants to supply the electric powertrains to building machine manufacturers in particular. This concept was already launched on the Intermat, but is now working. Deutz wants to enter the market in 2020. We drove with a full-electric Manitou.

Deutz is an important engine supplier for construction machinery manufacturers. For example Hitachi, Manitou, Liebherr and Volvo are customers. The latter had even a 25 percent minority stake in Deutz until last year.

The vision of Deutz therefore has an immediate impact on the technology that we will be able to see in construction machines in the coming years. Deutz has always been a classic diesel company. Now that this technique is under fire, at least there is an image problem, it was clear to Deutz that something had to be done.

A year ago, Deutz took over the startup Torqeedo
Exactly a year ago Deutz took over Torqeedo for that reason. A start-up specializing in electric powertrains for boats. With this Deutz seemed to not only want to bring technology, but also new impetus to it. A fresh wind, young employees.

Yet there was also criticism. Critics thought the takeover sum was very high. Deutz paid a mere 70 million euros for the company with a turnover of only 26 million euros. What happened was that Deutz had already entered the ship with a Chinese cooperation. The Germans had to write off 23 million last year.

This year there was the misfortune of strikes at a supplier
This year Deutz is unlucky because an important supplier of steel castings suffers from strikes. That cost Deutz 12,000 engines while the demand is huge. Another reason why it was time for the Germans to also want to report some positive news and make it clear why they bought Torqeede.

That is why Deutz already started on the Intermat with the hybrid and electrical plans at the beginning of this year. Since then, these plans have been made ready for use with steam and boiling water.

In two years, Deutz wants to actually deliver the electric powertrains. It is not yet clear which manufacturers will apply the technology first.

There is still uncertainty about the radius of action
Nor is Deutz concrete about the range of its fully electric powertrains. That can technically be explained. Because as manufacturers now buy a diesel engine from Deutz, they will soon be able to determine which diesel, hybrid or electric powertrain best suits a particular machine. Size of the battery pack, cooling and power of the electric motor can thus vary per manufacturer.

Deutz will then build the powertrains modularly and deliver them to manufacturers, including control and charger. It is also a cost / benefit story. A high battery capacity gives the highest operating range, but also requires a substantial investment.

Torqeedo does not build battery packs itself, but purchases it from car manufacturer BMW. It is unclear whether Deutz will use it later, or whether it will be bought elsewhere.

Hybrid in 48 and 360 Volt
Specifically, Deutz comes with a 48-volt diesel-electric hybrid drive and a heavier 360-volt (up to 100kW) hybrid variant. The advantage of this technique is that construction machines can be used with a smaller and therefore more economical diesel engine. The hybrid technology also provides a boost when maximum power is needed. It is also possible to work completely electrically for a short time.

Deutz demonstrated a converted Liebherr TL432-7 as an example. This telehandler normally has a 3.6-liter Deutz engine with 74 kW. Deutz replaced it with a smaller 2.2-liter engine with 56 kW and a 48-volt 20 kW electric motor. A battery pack of 10 kWu serves as a buffer. During the demo the diesel engine was continuously running.

100% electric in a Manitou MT1135
In addition to the hybrids, Deutz will supply a 100 percent electric drive for construction and agricultural machinery. We drove, and worked, with a Manitou MT1135.

Deutz disassembled the diesel engine here and built a 60 kW electric motor. This electric motor simply drives the existing pumps. The wheel drive therefore remains hydrostatic; so there are no electric wheel motors (yet). That would be a logical next step.

The ground clearance is limited
An under-built 30.5 kWu battery pack provides the energy. from 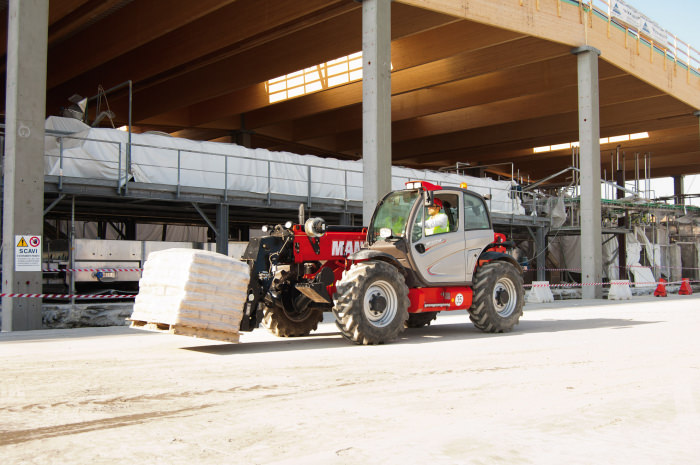